Acorus calamus, commonly known as sweet flag or calamus ( Sanskrit : Haimavati, हैमवती, Vacha, वचा ) and various rushes and sedges, is a plant from the Acoraceae family, in the genus Acorus. It is a tall perennial wetland monocot with scented leaves and more strongly scented rhizomes, which have been used medicinally, for its odor, and as an allegedly psychotropic drug. Its Sanskrit name is vacha. Probably indigenous to India, Acorus calamus is now found across Europe, in southern Russia, northern Asia Minor, southern Siberia, China, Indonesia, Japan, Burma, Sri Lanka, Australia, as well as southern Canada and Northern USA, where it may be mistaken for the native Acorus americanus.

The morphological distinction between the Acorus species is made by the number of prominent leaf veins. Acorus calamus has a single prominent midvein and then on both sides slightly raised secondary veins (with a diameter less than half the midvein) and many fine tertiary veins. This makes it clearly distinct from Acorus americanus.
The leaves are between 0.7 and 1.7 cm wide, with average of 1 cm. The sympodial leaf of Acorus calamus is somewhat shorter than the vegetative leaves. The margin is curly-edged or undulate. The spadix, at the time of expansion, can reach a length between 4.9 and 8.9 cm (longer than A. americanus). The flowers are longer too, between 3 and 4 mm. Acorus calamus is infertile and shows an abortive ovary with a shriveled appearance.
One subspecies, Acorus calamus var. angustatus Besser, Synonyms: Acorus asiaticus, Acorus cochinchinensis, Acorus latifolius, Acorus rumphianus, Acorus spurius, Acorus triqueter, Acorus tatarinowii, Acorus terrestris, Orontium cochinchinense, Acorus calamus var. spurius, Acorus gramineus var. crassispadix.

Both triploid and tetraploid calamus contain asarone Other phytochemicals include:

Calamus and products derived from calamus (such as its oil) were banned in 1968 as food additives and medicines by the United States Food and Drug Administration.

Calamus has been an item of trade in many cultures for thousands of years. Calamus has been used medicinally for a wide variety of ailments, and its smell makes calamus essential oil valued in the perfume industry.
In Bali, Indonesia, calamus is used to give flavour in meat, vegetable and fish dishes.
In antiquity in the Orient and Egypt, the rhizome was thought to be a powerful aphrodisiac. In Europe Acorus calamus was often added to wine, and the root is also one of the possible ingredients of absinthe. Among the northern Native Americans, it is used both medicinally and as a stimulant. It is believed by some that calamus is an hallucinogen. This urban legend is based solely on two pages of a book written by Hoffer and Osmund entitled "The Hallucinogens." The information on these two pages came from anecdotal reports from two individuals (a husband and wife) who reported that they had ingested calamus on a few occasions. None of the components in calamus are converted to TMA (trimethoxyamphetamine) in the human organism. To date there is no solid evidence of any hallucinogenic substances in calamus. Acorus calamus shows neuroprotective effect against stroke and chemical induced neurodegeneration in rat. Specifically, it has protective effect against acrylamide induced neurotoxicity.
For the Penobscot this is a very important root. One story that there was a sickness plaguing the people. A muskrat spirit came to a man in dream and told him that he was a root. He told the man where to find him. The man awoke, found the root, and made a medicine which cured the people. In Penobscot homes, the root was cut and hung up. Steaming it throughout the home is thought to cure sickness. While traveling, a piece of root was kept and chewed to ward off illness.
Teton-Dakota warriors chewed the root to a paste, which they rubbed on their faces. It prevented excitement and fear when facing an enemy.
The Ojibway make a tea by taking a piece of root and scalding it, then drinking the tea warm. Gargling the tea or chewing on a piece of root is also good for sore throat.
The Potawatomi powder the dried root and put up the nose to cure a runny nose. Illustration from an 1885 flora 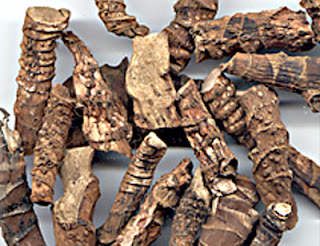 Sweet flag has a very long history of medicinal use in many herbal traditions. It is widely employed in modern herbal medicine as an aromatic stimulant and mild tonic. In Ayurveda it is highly valued as for its ability to bring clarity to the consciousness. It is the best remedy for the ill effects of alcohol, particularly on the brain and liver, and is used in Ayurveda to counter the side effects of all hallucinogens.]|date=April 2010} This root has been used as a rejuvenator for the brain and nervous system and as a remedy for digestive disorders. However, some care should be taken in its use since some forms of the plant might be carcinogenic The root is anodyne, aphrodisiac, aromatic, carminative, diaphoretic, emmenagogue, expectorant, febrifuge, hypotensive, sedative, stimulant,stomachic, mildly tonic and vermifuge. It is used internally in the treatment of digestive complaints, bronchitis, sinusitis etc. It is said to have wonderfully tonic powers of stimulating and normalizing the appetite. In small doses it reduces stomach acidity whilst larger doses increase stomach secretions and it is, therefore, recommended in the treatment of anorexia nervosa. However if the dose is too large it will cause nausea and vomiting. Sweet flag is also used externally to treat skin eruptions, rheumatic pains and neuralgia. An infusion of the root can bring about an abortion whilst chewing the root alleviates toothache. It is a folk remedy for arthritis, cancer, convulsions, diarrhoea, dyspepsia, epilepsy etc. Chewing the root is said to kill the taste for tobacco. Roots 2 – 3 years old are used since older roots tend to become tough and hollow. They are harvested in late autumn or early spring and are dried for later use. The dry root loses 70% of its weight, but has an improved smell and taste. It does, however, deteriorate if stored for too long. Caution is advised on the use of this root, especially in the form of the distilled essential oil, since large doses can cause mild hallucinations. A homeopathic remedy is made from the roots It is used in the treatment of flatulence, dyspepsia, anorexia and disorders of the gall bladder.
प्रस्तुतकर्ता Dr Navin Joshi at NPAFc पर 12:34 am