•    Cerebral palsy is a symptom complex, (not a disease) that has multiple etiologies.

•    CP is a disorder of tone, posture or movement due to a lesion in the developing brain.

•    It is static, but it symptoms may change with maturation

•    There are 2 major types of CP, depending on location of lesions:
–    Pyramidal (Spastic)
–    Extrapyramidal
•    There is overlap of both symptoms and anatomic lesions.

•    The pyramidal system carries the signal for muscle contraction.

•    The extrapyramidal system provides regulatory influences on that contraction.

Epidemiology
•    The overall prevalence of cerebral palsy ranges from 1.5 to 2.5 per 1000 live births.
•    The overall prevalence of CP has remained stable since the 1960’s.
•    Speculations that the increased survival of the VLBW preemies would cause a rise in the prevalence of CP have proven wrong.
•    Likewise the expected decrease in CP as a result of
C-section and fetal monitoring has not happened.
•    However, the prevalence of the subtypes has changed.
•    Due to the increased survival of very low birth weight preemies, the incidence of spastic diplegia has increased.
•    Choreoathetoid CP, due to kernicterus, has decreased.
•    Multiple gestation carries an increased risk of CP.


Distribution of the Types of CP


Etiology
•    CP has multiple etiologies- many are still unknown
•    Since CP is not a single entity, recurrence risks depend on the underlying cause.
•    If there is a regression in skills, suspect a degenerative disease.
•    Most causes are prenatal- genetic, congenital malformations, metabolic, intrauterine infections, rather than perinatal or postnatal- birth asphyxia, hemorrhage, infarction, infections, trauma.

•    Much of the literature of the 1990’s was directed at the controversy re the role of asphyxia in the etiology of CP
–    Asphyxia implies poor gas exchange, low Apgars and neurologic depression during and soon after delivery.
–    Significant asphyxia is accompanied by acidosis.
–    Asphyxia is rarely the cause of CP in the term infant.
•    In one outcome study of 43,437 full term children, 150 had cerebral palsy. Only 9 of these cases were attributable to birth asphyxia.
•    34 had spastic quadriplegia and 71% of those cases had identifiable causes.
53%- congenital disorders
14%-birth asphyxia
8%-CNS infections

•    Among the children with non quadriplegic cerebral palsy, congenital disorders appeared to account for  about 1/3 of the cases, and CNS infections accounted for 5%. 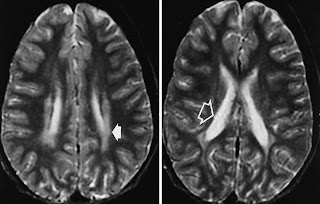 1.  Hemorrhagic PVL
•    Hemorrhage is associated with a collection of primitive cells between the ependyma and caudate that are programmed to “melt away” at 32-34 weeks gestation
•    They contain fragile capillaries that are easily damaged by hypoxia (lack of oxygen) and hypotension (drop in blood pressure).
•    When the blood pressure returns to normal, bleeding occurs because the preemie has underdeveloped autoregulation.
•    This bleeding may then rupture into the ventricle and/or parenchyma
•    Periventricular venous congestion (swelling) may then occur, and cause ischemia (lack of blood supply) and periventricular hemorrhagic infarction.
2. Ischemic PVL
•    An ischemic infarction or failure of perfusion usually to the watershed area surrounding the ventricular horns- “HIE white matter necrosis”.
•    Peak incidence occurs around 32 weeks
•    Larger infarcts may leave a cyst
•    Secondary hemorrhage can occur into theses cysts- “periventricular hemorrhage”.
•    PVL can extend into the internal capsule  and result in hemiplegia superimposed on diplegia.
•    Prenatal maternal ultrasound has detected lesions in the fetus at 28-32 weeks gestation, thus confirming that PVL can occur prenatally.


Parasaggital Cerebral Injury
•    Injury is related to vascular factors, especially in the parasaggital border zones that are more vulnerable to a drop in perfusion pressure and immature autoregulation.
•    The ischemic lesion results in cortical and subcortical white matter injury.
•    It is usually bilateral and symmetric.
•    The posterior aspect of the cerebral hemisphere especially the parietal occipital regions is more affected than the anterior.


Selective (Focal) Neuronal Necrosis (SNN)
•    Occurs in the glutamate sensitive areas in the basal ganglia, thalamus, brainstem and cortex.
•    The location of the focal necrosis, which show up as cystic lesions on MRI, depend on the stage of development of the infant’s brain at the time of the HIE.
–    For example, HIE at term often produces SNN in the basal ganglia since it is glutamate sensitive and very hypermetabolic at term.

A.Pyramidal (Spastic)
•    Quadriplegia- all 4 extremities
•    Hemiplegia- one side of the body
•    Diplegia- legs worse than arms
•    Paraplegia- legs only
•    Monoplegia- one extremity

B. Extrapyramidal
Divided into Dyskinetic and Ataxic types


Medical Management
Growth
•    Persons with CP often have struggle to gain or maintain weight.
•    Failure to Thrive is a common problem.
–    Before diagnosing Failure to thrive, an accurate Body Mass Index must be obtained, but an accurate height is difficult to obtain in a person with severe contractures.
–    In such cases, arm span calculations may be used and a growth chart is available to determine percentiles standardized to age and gender.

Spasticity Management
Management of spasticity does not fix the underlying pathology of CP, but it may decreased the sequelae of increased tone.
•    Over time, the spasticity leads to:
–    musculoskeletal deformity
•    scoliosis
•    hip dislocation
•    contractures
–    Pain
–    Hygiene problems